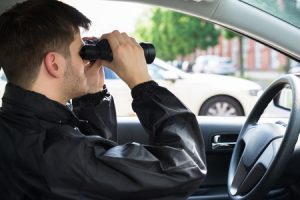 Private investigators employ a variety of types of surveillance, depending on the case at hand. Today we’ll address a few of the most common surveillance techniques that PIs use to track and monitor suspects.

A PI can conduct surveillance on telephone, fax, internet and email communications, using electronic devices to monitor communications 24/7. These days, they may also monitor a suspect’s social media presence to find evidence of wrongdoing.

A private investigator will sometimes observe people or places at a distance. If he or she works with a partner, they can alternate positions to reduce their chances of discovery.

In this setup, three PIs watch a subject. The first remains behind the target at a distance, with the second following closely. The third investigator is typically across the street, either slightly behind or ahead of the target.

These types of surveillance are all covert, meaning that the person being observed or tailed isn’t aware that they are being observed. Covert surveillance often requires approval from a court. A good PI will be aware of all the laws in your state that govern invasion of privacy, audio recording and trespassing, and will conduct the investigation within their legal limits.

Whether you’re dealing with a child custody case, insurance fraud, background investigations or any other issue that requires surveillance, a private investigator can help. If you’re in the Oklahoma City area, contact RKJ Investigations at (405) 562-6479 to learn more today!

Fraud is a major issue in the insurance industry, from individuals faking injuries to suspicious billing practices on the part of physicians or clinics. If you’re faced with an insurance fraud case, a private investigator can help. Here’s how: Research A private investigator will research a potentially fraudulent claimant’s criminal history and determine if they’ve… END_OF_DOCUMENT_TOKEN_TO_BE_REPLACED

Fraud is a real problem for many insurances companies across the country. Statistically, fraud accounts for an $80 billion deficit across all areas of insurance, often forcing companies to hike up premiums, and that’s never good for business. The following are the facts you should know about hard and soft insurance fraud which will help… END_OF_DOCUMENT_TOKEN_TO_BE_REPLACED

Unspeakable crimes. Seedy characters. Blood and gore. These are the grisly makings of a Hollywood horror movie, and the real-life atrocities captured by the theatre of United States history. Who better suited to narrate this drama than the infamous cannibalist serial killer Jeffrey Dahmer? The case of Jeffrey Dahmer is perhaps the most famous cold… END_OF_DOCUMENT_TOKEN_TO_BE_REPLACED

Through digital forensic techniques, experts are able to recover data from a string of electronic devices, including mobile phones, laptops, home computers, and iPads. Through this careful recovery, investigators have managed to solve cases involving intellectual property theft, espionage, and more famously, murder. Here are a few of the most famous cases where digital forensics… END_OF_DOCUMENT_TOKEN_TO_BE_REPLACED

Insurance fraud is a growing problem across the country. It is also becoming a more diverse threat as fraudsters adopt new strategies and target additional insurance types. While overall, national fraud incidents remain difficult to fully tally, it is estimated that these costs easily amount to tens of billions of dollars each year. Are you… END_OF_DOCUMENT_TOKEN_TO_BE_REPLACED

If you’re struggling in your marriage or partnership, this time of year can be hard. Valentine’s Day places “happy couples” on a pedestal, and basically tells the rest of us that if our relationship isn’t perfect, then we’re doing something wrong. It also obscures a little bit of truth: most relationships aren’t actually perfect. And… END_OF_DOCUMENT_TOKEN_TO_BE_REPLACED

As technology advances, so does our ability to solve the most complex of cases, and of the most helpful technological tools we have at our disposal, global positioning systems are easily at the top of the list. Although many people use GPS in their cars to drive from one destination to another, the applications are… END_OF_DOCUMENT_TOKEN_TO_BE_REPLACED

One of the biggest concerns insurance companies and businesses face is fraud. People routinely try to take advantage of the insurance system by either making up false claims or, more commonly, exaggerating damage in an effort to get a larger payout than they deserve. RKJ Investigations can help insurers and businesses crack down on fraudulent… END_OF_DOCUMENT_TOKEN_TO_BE_REPLACED

If you’re reading this, there’s a good chance you feel someone’s watching you. And there’s a good chance you’re right. Most people would be stunned by how often a client suspects some kind of surveillance and turns out to be right. Your instincts are a valuable barometer of your own personal safety, and if something… END_OF_DOCUMENT_TOKEN_TO_BE_REPLACED